Safety is top priority in the offshore gas industry, but accidents still happen – occasionally with disastrous results. How does the industry work with reducing risks, and how successful has it been?

On July 6, 1988, a series of explosions ripped through the Piper Alpha oil and gas platform off the northeast coast of Scotland. Within two hours 167 men lost their lives, making Piper Alpha the world’s worst offshore disaster. Now 25 years later, there has been great progress on safety, but the volatile nature of hydrocarbons means there will always be risks in drilling for, transporting, and processing natural gas.

Ken Arnold, senior technical adviser for WorleyParsons who has nearly 50 years in the oil and gas industry, including 16 at Shell, says the biggest offshore safety issue is loss of containment. “Hydrocarbons are safe if you keep them where they are supposed to be,” he says. “The danger comes when they start to leak out. So the greatest effort is to make sure we never lose containment. That possibility is always there, but the goal is to minimize those occurrences.” As with Piper Alpha, most offshore accidents are caused at least partly by human error. “It is documented that 80 to 90 percent of all accidents are due to humans in action,” says Arnold. “But you could also say that 80 to 90 percent of accidents are due to design mistakes. You need to do designs in such a way that if something goes wrong, the natural reaction of the human who has to interface with it is to do the right thing. And that is not always the case.”

To reduce the chance of accidents being caused by equipment failure, there is constant demand by oil and gas companies for more reliability from equipment suppliers. “The more reliable equipment is, the safer it is by definition,” says Arnold. “Things rarely go wrong when everything is operating as it should. It is in shutdowns, start-ups, construction and maintenance that we expose ourselves to greater risk.”

The gas industry is one of the most extreme environments for heat exchangers. In heat transfer applications at gas sweetening plants – where hydrogen sulphide and carbon dioxide are removed from the gas – temperatures can reach 140°C and pressures sometimes touch 35 bar. Add into the mix highly toxic gases, plus the fact that gas-sweetening systems are among the most challenging duties for polymer gaskets, and there is simply no room for error.  “If there is a leak in a heat exchanger in a dairy, you get spilled milk – and we all know that’s nothing to cry over,” says Magnus Hoffstein, Alfa Laval’s market unit manager for gas. “But if you have a leak in a gas plant it could lead to deaths, so selecting the right type of equipment cannot be taken lightly. In these cases it’s good to have a strong team including polymer specialists and senior design engineers to discuss the selection with. We obviously want to offer a competitive solution, but we will never compromise on safety.”

Actors in the gas industry have to find a balance between equipment cost and performance, and that balance can depend on the particular application. At a gas-sweetening plant, in one position it is perfectly fine to use a gasketed unit – no hydrogen sulphide, moderate temperatures and reasonable pressures. But in another position in the same plant, the conditions could destroy the polymer gaskets. “So we make an assessment,” says Hoffstein. “What is the likelihood of a leak and what are the consequences? If the consequences could be fatal, then we only offer our safest solution, the welded Compabloc, even if the customer claims to want a gasketed heat exchanger.”

In the vast majority of cases, the customer goes for the safer but more expensive solution. “It’s usually a matter of informing and educating,” says Hoffstein. “The safety awareness throughout the gas business is so high so it’s fairly easy to get everyone aligned towards reducing risk.”

Following its acquisition of Aalborg Industries, Alfa Laval is also a major supplier to the natural gas industry of inert gas systems, which play an important role in safety and are required by law on LNG tankers and elsewhere. “We rely on inert gas systems a lot,” says Arnold. “We start out with equipment that is full of air and we want it to be full of hydrocarbons. If we replace the air directly with hydrocarbons, there is a risk of explosion. In these big complex facilities almost universally we displace the air with inert gas first, and then displace the inert gas with hydrocarbons, so that we never have a mixture of air and hydrocarbons.”

New safety challenges are being thrown up by the fact that gas is being produced in ever-deeper water. “It’s always harder to control something you can’t see,” says Arnold. “Flow assurance and keeping things from plugging or corroding are much more complex in deep water than they were in shallow water. And of course now we are producing from gas wells 120 kilometres from shore and that creates a whole new bunch of problems.”

The advent of floating liquefied natural gas (FNLG) facilities presents others. “We have experience of LNG tankers, which are quite safe,” says Arnold. “But what is different about FLNG is that you have ignition sources sitting above the LNG tanks. This is receiving a lot of concentrated thought and risk analysis.” Arnold says that safety in gas production has improved greatly during his long career, but more remains to be done, especially on building a safety culture in the industry. “There has been a huge change,” he says. “For periods of time we make incremental changes, and then something bad happens like Piper Alpha or Macondo [in the Gulf of Mexico in 2010], and all of a sudden we wake up and say, ‘Wait a minute, we have to do better than this.’ And we make a step change. And then after the step change we go along making incremental changes again until the next accident catches us.”

“We have done a very good job of dealing with the kinds of accidents that can injure or kill one or two people. But what we are concentrating on now, and trying very hard to improve, is the very rare, very high consequence issues like Macondo or Piper Alpha.” 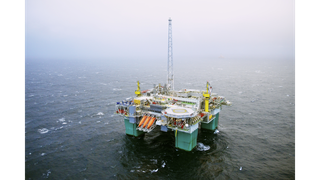 Installations such as productions platforms and floating production, storage and offloading (FPSO) vessels are a fundamental part of the offshore oil and gas industry’s infrastructure. When Aker Solutions designs such complex installations, health, safety and environment are

designed in at every step. “Our main goal is to make sure that we can deliver solutions and products that are safe for our clients to operate,” says Jan Erik Aspunvik, Health, Safety and Environment (HSE) adviser at Aker Solutions. “We set out to identify the risks, and through our design to control those risks and reduce the probability of unwanted events happening.”

So Aker solutions designs three major safety principles into its installations. Initially it is important to ensure that gas leakage and fire do not occur. “For example we try to minimize the potential leakage points, such as valves or flanges,” says Aspunvik. “Fundamental to safety is having a simple design.”

Secondly, if a leak does occur, systems are put in place to mitigate that event. “If it is not possible to prevent a leakage, we try to control it and reduce its consequences,” says Aspunvik. “That can involve taking away the hydrocarbons in a controlled manner, or using firewater systems and gas detection systems.”

The third safety design principle comes into effect if, for whatever reason, the situation gets out of control. “We make sure that we can safeguard the people onboard by evacuating them to a safe haven by helicopter or lifeboats.” To be able to deliver the safest possible solutions to its clients, Aker Solutions demands the highest standards from its suppliers. “We are relying on their reliability and performance,” says Aspunvik. “This is an important part of risk management – that our suppliers comply with our HSE requirements and that the requirements are brought forward to their sub-suppliers.”

Alfa Laval is one of those suppliers, providing Aker Solutions with a range of equipment including high-speed separators and several types of heat exchanger. “Heat exchangers are used to take out or introduce heat to the hydrocarbon stream, and it is important that the system is not subject to any leakage or corrosion that could create an explosive atmosphere,” says Aspunvik. “Alfa Laval is in general a company known to deliver high-quality equipment that meets HSE requirements, and this is very important to be a supplier in the oil and gas industry.”

All Oil and Gas United Kingdom and Ireland United States