The mammoth vessel used in China’s soon-to-be-operating Pan Yu oil field, will not only allow treatment, storage and off-loading of oil under extreme conditions – but also accommodate workers in high style.

At the mouth of the Yangtze River delta, in the busy Shanghai Waigaoqiao shipping yard, hundreds of shipbuilders are putting the finishing touches to an impressive oil vessel that is 262 meters long and 46 meters wide. On board, technicians are fiddling with computers in the control room. Construction workers in hardhats are hard at work building the living quarters below the top deck. Even the steady and frequent rains in Shanghai haven’t dampened the upbeat atmosphere onboard.

The China National Offshore Oil Corporation (CNOOC) has been building this Floating Production Storage and Offloading Vessel (FPSO), at a speedy pace, working almost twice as fast as it usually takes to complete a vessel of this scope and size. So far, the construction of the FPSO vessel, which began in February 2002 and is scheduled for completion by July 2003, has been running smoothly and quite efficiently.

After it is completed, a tugboat will guide the FPSO vessel to the South China Sea, 200 kilometers south of Hong Kong, where a new offshore oil field at 100 meters water depth, the Pan Yu project, will begin operation in September. The vessel will provide energy to the project and serve as a temporary storage area for the large quantities of crude oil that will be drilled from the deep-sea bottom.

As China’s energy needs expand to meet the needs of its 1.2 billion and growing population, so do the country’s oil fields. The Pan Yu project will join 10 oil fields already in operation in the South China Sea, BoHai Bay, etc. Other oil fields in China are situated over the country’s vast desert areas in the north and west, as well as in the Pacific Ocean. About two-thirds of the oil consumed in China is produced domestically.

About 100 employees will live on the FPSO vessel at any given time, working alternating shifts of 28 days with another 100-person crew. Since Pan Yu will operate 24 hours a day, and as close to 330 days a year as possible, quite an effort has been made to ensure the comfort of workers on board. The living quarters will have satellite television, a fitness center, Ping-Pong tables and three dining rooms. According to the CNOOC project team, it will be comparable to a three-star hotel. The vessel even has a landing area for helicopters, which will transport crew members back and forth between the vessel and the mainland.

As opposed to traditional drilling platforms, which cannot be anchored in great depths of water, the processing facilities of the FPSO are installed on the sea bottom. Oil extracted from the sea bottom will flow from two deeply planted platforms through pipes to the Pan Yu vessel, which will sit between the two platforms at an equidistance of nine kilometers. The vessel, which is the 11th FPSO in China and the sixth one domestically produced, can store 17,000 tons of oil in its 10 cargo tanks. Every five to seven days, a shuttle tanker will arrive at the Pan Yu project to empty the cargo tank and transport the oil back to the shore.

Quite a power plant 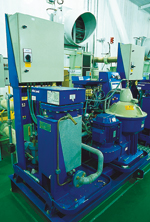 The Pan Yu vessel not only serves as a temporary storage area for crude oil, but it also uses the oil to generate power for itself and the platforms using diesel engines. Caterpillar Motoren GmbH in Germany is responsible for the engines and the support systems on board that will be used to power the oil platforms and the vessel. “It’s quite a power plant,” says Victor L. Sheldon, the Pan Yu FPSO project manager for Caterpillar Motoren GmbH. He adds that Caterpillar bought equipment from Alfa Laval that was “critical” for the Pan Yu project’s operation.

Hidden inside the vessel, like gems imbedded in a mine, are Alfa Laval’s heat exchangers and separator systems. The heat exchangers can increase and decrease the temperature of the oil as needed, while two separator systems treat crude oil and lube oil respectively, so that it can be used as fuel oil and lubrication for the powerful diesel motors that generate electricity for the vessel.

Alfa Laval equipment will be put to the test, given the environment and conditions of the Pan Yu project. Because the vessel will be situated in the middle of the South China Sea, the equipment must be resistant to vibrations, rain, cold and a salty atmosphere.

Starting each May and lasting through the summer months, periodic typhoons, bringing high winds with the speed of 62 m/s and pounding waves with the height of 22 meters under extreme storm conditions, hit the South China Sea. These storms place even greater demands on the equipment. In addition, because the Pan Yu vessel must operate without breaks, reliability is an important attribute, which is why, says the CNOOC project team, it went with Alfa Laval. The separator systems were rigorously tested for performance and safety.

Zhao Ying Nian, the executive deputy general project manager of CNOOC’s Pan Yu project, has used Alfa Laval’s heat exchangers in previous projects and is confident that they are the right choice for this application. “The quality was very good,” he says, recalling those past experiences. And, he says, knowing that a product will be reliable is extremely important. “We have to make sure that there aren’t any problems before using a particular kind of equipment.”

Zili Zhong, the assistant sales manager for Alfa Laval in China’s Guangzhou office, says he is happy to see that the heat exchangers and separator systems have been properly installed onboard the FPSO vessel. But, he adds, his job is not done yet. “We will have to ensure that they continue to be satisfied with our high-quality products.”

At the very core of the China National Offshore Oil Corporation’s Pan Yu project are the FPSO vessel’s engines, which were built by Caterpillar.

Once the Pan Yu FPSO begins operation in the South China Sea, the five engines can run with a combined output of 40 megawatts. During normal operation, however, between one and four units will be working, with one engine reserved as a backup.
Caterpillar’s responsibilities have been much greater than just the design and manufacture of Pan Yu’s engines. In fact, the global heavy equipment and engine manufacturer has delivered the entire power generation plant for the vessel.

Quite a bit of Caterpillar’s energy has gone into ensuring that safety considerations are adequately addressed. A big safety hazard onboard the FPSO is the possibility of an explosion resulting from extraneous fuel vapors. To ensure the proper ventilation for the engines and engine systems, combustible vapor-detection devices and equipment designed to capture vapors and liquid fuels have been placed in the engine rooms and supporting system modules.

The FPSO has also been outfitted with nitrogen generators. These provide nitrogen for purging or denying oxygen in portions of modules where combustible vapors exceed safe levels. The combustible vapor sensors and infrared flame detectors, which sense sources of heat, provide a safe, reliable working environment.

Caterpillar worked with different suppliers to deliver the final product to CNOOC. Victor L. Sheldon, the Pan Yu FPSO project manager for Caterpillar Motoren GmbH & Co., notes that Alfa Laval played a principal role in the project. “The lube and crude separators were crucial to the project,” he says.

Sheldon explains that Caterpillar chose these separators because end customer CNOOC knew it was a good product. “Because of their past experiences they specified they wanted Alfa Laval equipment,” he says, adding that he was pleased with the choice, having had 25 years of experience working with Alfa Laval himself. “It made our lives at Caterpillar easier.”

Heiko Habedank, the sales manager for Marine & Diesel at Alfa Laval in Germany, explains that the company’s close contact with Caterpillar made the project successful. “We exchanged information about how the projects were doing, how we could improve. We had day-to-day contact.” Caterpillar and Alfa Laval plan to work together on future projects, says Habedank, and because of China’s growing need for oil, the future for FPSO vessels in China looks quite bright.

All Oil and Gas China