To Oxiquim S.A, a leading Chilean integral chemical company, liquid propane spelled opportunity. But the traditional methods of storing it and readying it for distribution were expensive and unreliable and an alternative method threatened the environment. After evaluating possible alternatives, Oxiquim S.A. concluded that ambient air could be used as a source of heat in order to meet their needs. With that in mind, they contacted Alfa Laval Chile to design and provide a thermal solution based on this approach. 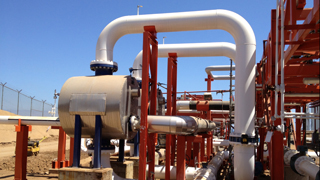 “In Chile, imported liquid propane is used as fuel for both cooking and heating, and there is money to be made in storage and distributing it,” says Daniel Aiken, Senior Gas Process Engineer at Alfa Laval. “But there are also difficulties. For one thing, propane must be stored at -44°C, and then heated to approximately -5°C before it can be pumped into the distribution system.”

Sometimes air is used to heat very low temperature liquids like liquid nitrogen, liquefied methane and others – including propane. However, this method requires extra capacity because as the units cool down while the propane is being heated, frost forms. So it’s necessary to switch to a second frost-free unit – and to switch back again when frost inevitably forms on the unit.

Burning up the product

A second traditional alternative is to use a warm water bath as a backup technology for heating the propane when the air temperature is too low to be effective as a source of heat. However, the water must be heated – using propane – which of course adds to the operating costs of the system.

Another challenge was the fact that the system would be started up with as little as two hours’ warning (to take advantage of less expensive low-demand periods for the pipeline), and then shut down again at the end of the day. Such rapid and frequent temperature changes put traditional heat exchanger equipment under a lot of stress, causing frequent downtime and high costs for repairs.

Sea cooling and the environment

“Oxiquim knew they wanted a better, more reliable and less expensive way to handle propane,” says Daniel. "So when Oxiquim’s engineering design company, which was responsible for the system's design, contacted us at Alfa Laval, they were looking to purchase an Alfa Laval heat exchanger.”

The engineering company wanted to use the heat exchanger with water from a nearby bay as the heating source. But since this would require releasing a great deal of cold water into the shallow bay, an environmental impact study was required before an environmental permit could be issued. Completing such a study would have created an unacceptable delay for the project.

“Alfa Laval was able to present an alternate process solution based on an entirely new approach,” continues Daniel. “The propane would be warmed with a circulating water-glycol mixture to prevent freezing, which would then be heated in dry air coolers using ambient air – which of course costs nothing.”

And for times when the ambient air temperature is below 10°C and thus not warm enough, Alfa Laval’s process uses boilers fuelled by natural gas as a back-up. On hot days on the other hand, less air is needed to heat up the glycol mix so fans are automatically shut down, saving electricity, and thus increasing energy efficiency.

A host of advantages

The system is also fast and easy to turn on and shut down and much less stress is put on the equipment because of the system configuration and control strategy used to minimize the large temperature differentials. So Oxiquim avoids frequent repairs that are common with other traditional heating options and the downtime that comes with it.

Another advantage to using indirect heating of the propane with glycol was that commercial grade dry air coolers and fans could be used. This lowered the equipment costs compared to the equipment costs for heating propane directly, which would have had to meet petrochemical specifications.

We chose Alfa Laval because once we started talking to them, we realized they were not only an equipment provider but a process solution provider,” says Oxiquim’s Pablo Mercado. “Alfa Laval  had the expertise to provide us with a more reliable process with lower operating costs and less impact on the environment. The system has been up and running for over a year now – and we’re happy with the results.”

Located in Quintero, Chile, Oxiquim S.A, is a leading integral chemical company active both locally and internationally. Its marine terminal division handles loading and unloading as well as storage, and distribution of petrochemicals and liquid propane.

To design, supply and install a system that could overcome the challenges caused by traditional equipment for heating liquid propane to the levels required for distribution. In other words, a more reliable and efficient system that would have as little impact on the environment as possible.

The propane is warmed with a circulating water-glycol mixture which is then heated in dry air coolers using ambient air.

All Chile Oil and Gas