Gas is redrawing the energy map

Revolutionary advances in technology are opening up vast reserves of natural gas previously out of reach to human exploitation. The second coming of this familiar resource is already redrawing the world energy map. Could natural gas be poised to challenge oil as the most important fuel source on the planet?

It’s colourless, virtually odourless and definitely not to be sniffed at. Just as we were contemplating life beyond oil and a transition to renewables, natural gas is poised to enter a golden age that could transform world energy markets for decades to come.

The reason is technology. Natural gas has been an important energy source for decades, but new and improved drilling techniques are enabling producers to extract gas from vast, once-inaccessible deposits locked in shale formations far underground, and from offshore deep-water wells thousands of metres below the waves.

The technology boom began in the United States in the 1990s and in a few short years has transformed the energy market there. The figures are remarkable: US unconventional gas production – so called because of the new, unconventional technology used to extract it (see sidebar on page 12) – has rocketed from 1 percent of gas production in 2001 to 37 percent in 2011 – and the figure is climbing every year.

Soaring production and discoveries of new unconventional
gas reserves have driven US natural gas prices to a 20-year low, creating a new cheap energy source with the potential to make the US self-sufficient in energy and transfigure its energy security. Surging production since the mid-2000s has made the US the world’s second-largest natural gas producer in 2011, only just behind Russia.

Shale gas is the largest of three types of unconventional gas. Found in impermeable shale rock formations, this gas has previously been out of reach to extractors. But the development of new technologies – notably hydraulic fracturing (fracking) – has made these deposits accessible for the first time. The technology is truly groundbreaking – literally and metaphorically. Not only does it make it possible to tap immense new gas reserves, but it is also cheap.

The shale boom has already rejuvenated the US natural gas market. Experts think it might have the potential to do the same globally, creating a global energy revolution. Three countries – China, Argentina and Algeria – actually have larger unconventional gas deposits than the US. They and others like Canada, Mexico, Australia and South Africa, all stand to make enormous financial gains by adopting fracking.

Industry experts are in no doubt of fracking’s potential to change the dynamics of world energy. “The global unconventional shale boom is arguably one of the biggest technology breakthroughs in decades,” said Swiss bank Credit Suisse in a recent report.

While it is unconventional gas such as shale that is the main game changer, new techniques and technologies are also opening up new possibilities for extracting previously out-of-reach gas from conventional sources. Shell’s floating liquefied natural gas (FLNG) vessel, for example, has the potential to revolutionize the way conventional natural gas resources are developed. When it becomes operational in the Prelude gas field, off Australia’s northwest coast, FLNG will help to unlock offshore energy resources without the need to lay pipelines and build processing plants on land.

While FLNG will operate in about 250 metres of water, another way to get to previously untapped gas resources is to go deeper. Much deeper. It is estimated that some 70 percent of deepwater resources are located at depths of between 2,000 and 4,000 metres, which presents tough technical challenges, such as extremes of pressure and temperature. Earlier this year, plans were announced for the world’s deepest offshore floating oil and gas facility off the coast of Louisiana, which will drill in water some three kilometres deep.

Peter Rushworth, in a report from consultants IHS, says that in the last ten years more than half of new global conventional gas reserves were discovered offshore, with the most significant discoveries in Brazil, the US, Angola, Australia, India, Nigeria, Ghana and Malaysia. “Deepwater and ultra-deepwater discoveries are becoming the dominant source of new reserve additions, accounting for 41 percent of total new reserves,” he says. “This trend will likely continue, making offshore – and particularly deepwater – key contributors to new supply growth.”

But – and it is a big but – fracking is deeply controversial. Environmentalists blame it for groundwater pollution and for causing seismic events including earthquakes. Aside from the impact of fracking itself, many environmentalists oppose an expansion of natural gas because it is non-renewable and, as a hydrocarbon, contributes to global warming when burnt for fuel.

However, natural gas is the cleanest hydrocarbon, emitting less CO2 than oil and much less than coal. Switching to natural gas from coal and oil would slash world carbon emissions. Thanks in part to natural gas, US emissions of CO2 associated with energy production have been reduced to their lowest level in years.

Alan Riley, professor in energy law at City University London, believes the shale gas revolution could be the means to blunt the rise of carbon emissions and prevent global warming from reaching catastrophic proportions. “Shale gas emits 50 percent less carbon dioxide than coal, so if countries like China and India make the switch on a large scale, then we have a chance to reset the trajectory of global carbon dioxide emissions.”

Broad development of shale gas resources – with proper ecological safeguards – could, Riley argues, “be the best way to achieve the quick cuts in carbon dioxide emissions that we need to maintain a habitable environment on Earth”.

David Bellman, of All Energy Consulting, agrees, saying that jettisoning a resource that will provide enhanced energy security would be wasteful. Better, he says, to pursue the regulatory frameworks needed to tap shale gas in the most sensible and safe ways possible. “Fracking has to be prudent. You don’t want drilling on a faultline. You still need oversight,” he says. “Ignoring environment concerns is ignoring reality. What we need is pragmatic compromise.”

For although some countries, mainly in Europe, are striving to move beyond fossil fuels, the reality is that hydrocarbons will continue to dominate the energy mix for a long time to come. The indications are that unconventional gas will be so cheap that it will undercut not just fossil alternatives like oil and coal but also renewable fuels like wind and biomass, potentially stunting the international transition to renewables.

The gas revolution is redrawing the world energy map and shifting the balance of power. Countries with large unconventional gas reserves, like the US and China, have geopolitical reasons for exploiting the resource on a major scale as it would bolster their energy security by reducing reliance on petrochemical powerhouses like the Gulf countries and Russia. Likewise, unconventional gas deposits in East European nations such as Bulgaria, Romania and the Czech Republic have the potential to counterbalance the region’s reliance on gas imports from Russia.

So the critical question is what the global impact of unconventional gas will be. Will the boom spread outside the US and catch on abroad? The answer, according to Credit Suisse, is that it will – but only over the longer term. China has twice the recoverable shale reserves of the US but is still investing heavily in coal. Not until the next decade will Chinese unconventional gas production have the potential to be a game changer, Credit Suisse believes.

The geopolitical repercussions of this potential reality are hard to gauge. But for hard-pressed American manufacturers, especially those in energy-intensive industries, this cheap new energy source is manna from heaven.

But the implications go beyond industrial gains. In parts of Africa and Latin America, the growth of natural gas could bring electricity to people for the first time. “Natural gas has electrification potential for a lot of people,” says Bellman. “No other electricity generation can beat the cost of capital of a natural gas plant. Parts of society that didn’t have access to electricity because they couldn’t afford it now have the potential to get it. That’s a huge leap forward.” 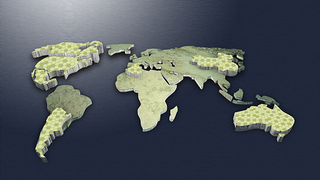 While Iran, Russia and Qatar have the world’s largest conventional natural gas reserves, new technologies could transform the countries with the biggest technically recoverable unconventional gas reserves into energy giants. The top seven, in order of the size of their unconventional reserves, are China, Argentina, Algeria, the US, Canada, Mexico and Australia.

Did you know that..

Natural gas can be categorized as either conventional or unconventional – terms that refer not to the nature of the gas itself, but how it is mined.

Conventional gas is natural gas occurring in permeable rock types. The porous nature of the rock allows the gas deposits to migrate through the rock and accumulate in pools that can be tapped using conventional techniques – typically by drilling wells.

Offshore deepwater drilling is defined as oil and gas exploration and production at depths of between 500 and 1,499 metres. Ultra-deepwater covers activities deeper than 1,500 metres.

Unconventional gas is found in impervious rock, where it is trapped by geological conditions and therefore cannot collect in pools. It is mined using unconventional extraction techniques such as hydraulic fracturing (fracking), a process which involves pumping fluid into the rock to create pressure that shatters it and enables the gas to be recovered.

Shale gas is by far the most prevalent of the three and is natural gas trapped within shale formations – fine-grained sedimentary rocks. The shale gas boom is responsible for the recent rejuvenation of the natural gas industry.

Natural gas has electrification potential for a lot of people. Parts of society that didn’t have access to electricity because they couldn’t afford it now have the potential to get it. That’s a huge leap forward.