The king of soy proteins

With rising living standards, Chinese have become more nutrition conscious. Linyi Shansong Biological Co., Ltd. has cashed in on that trend with a wide range of soybean-based health food products.

Soybean has long been deemed a vital source of protein that prevented severe malnutrition among the general Chinese population when the country was suffering from a food scarcity three decades ago. In those days, soy protein was often absorbed in the form of various bean curd products.

Today, the Chinese still relish their bean curd dishes – mild or spicy – but few would regard it as a life-saving source of protein any more. Advanced processing of soybeans has given the Chinese access to a wide array of pure and more nutritious soy protein products.

Linyi Shansong Biological Products Co., Ltd., located in Linyi in the south of China’s Shandong Province, has become an important R&D and production company on the booming soy protein market both in and outside China.

Founded in 2001, the company has embarked on an aggressive expansion in the production of soybean-based products such as soybean oil, soy protein isolates (SPI), soy oligosaccharide syrup (SOS) and soy peptide. In just a few years, it has become the largest soybean-based health food and food ingredient producer in China, and one of the largest in Asia.

Linyi Shansong’s SPI, made from defatted soy flakes, contains 90% protein and has been widely used as an ingredient in food products to improve their texture and nutritional value.

Soybean peptide tablets, a new product that hit the market in 2006, are said to enhance strength and relieve fatigue. The product is also believed to have a bright future in the beverage industry.

Zhang Lifeng, Chief Engineer of the company, described the company’s rapid expansion as a response to the rising demand from the increasingly-affluent Chinese, who have become ever more health and nutrition conscious.

”Following milk and vitamins, soy protein products are beginning to gain recognition in China as a health supplement,” Zhang said, adding that the demand will grow further as the awareness of soy protein nutrition improves among the population.

The Chinese Ministry of Health’s plan to promote ”two proteins” – plant and animal proteins – in food is also expected to help stimulate demand for its products. Soy protein is the only complete plant protein, which means it contains all nine essential amino acids in the right balance to meet the body’s needs, according to the US Soyfoods Directory.

Besides a robust domestic market, the company, which is listed on the Singapore Stock Exchange, has also witnessed rapid export growth, with products being sold to more than 20 countries and regions in the world, including Japan, Russia, Brazil and Southeast Asia.

Zhang believes that the company’s strong R&D capacity has given it a distinct edge, especially in the Chinese market. ”Even the closest competitor in China is some three to five years behind us,” said Zhang, who has been doing food research for over 20 years.

That success, Zhang said, did not come easily. He and his team have spent several years and millions of US dollars of investment in researching and developing new products.

Company Chief Executive Officer Li Zhuping said in a report that Soy protein products are gaining recognition in China as a health supplement. the company plans to step up its R&D efforts in improving existing products and extending the current product range to keep its market leadership.

An aggressive marketing campaign launched last year has also helped the company to boost sales of its products, especially SOS and soybean peptide, 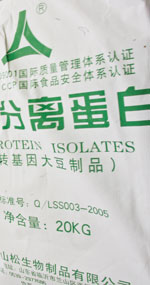 which directly reach individual consumers through its own brand, Tian Song.

Some 400 specialty stores, known as Tian Song Health Bank, have been set up in major Chinese cities such as Beijing, Shanghai and Guangzhou. The total number of stores is likely to reach 3,000 to 5,000 in the next three years, according to Zhang.

Besides consumers, investors have also shown great enthusiasm. Its share prices have climbed several times since the company’s IPO May 2005. Company chiefs are satisfied with the complete vertically-integrated facilities that produce both upstream and downstream products. It allows the company to maximize the use of soybeans, better manage the cost, increase supply and quality of raw material, defat the soy flakes, and profit from the economies of scale.

Li, the CEO, said his company boasts the longest soybean processing chain in the world. The company’s two production plants, in Northeast China’s Heilongjiang Province, are the country’s largest soybean production bases, and offer easy access to abundant high quality and non-genetically modified soybeans. Soybeans from Heilongjiang also have a higher protein content than most soybeans China has imported from abroad.

At its Fujin plant in Heilongjiang, oil is extracted from soybeans to make defatted soy flakes for use in the production of SPI. The extracted soybean oil is then sold to its customers for further processing into high-grade oil.

At its two other plants in Daqing of Heilongjiang and Linyi of Shandong, the company produces SPI using defatted soy flakes as raw materials. During the process, soybean whey is derived and utilized by the company with the membrane separation technology to produce SOS. ”Nothing has been wasted in the soybean processing,” Zhang Lifeng said. ”We have actually turned waste into treasure,” said CEO Li, referring to the production of SOS.

For Linyi Shansong, the production of SOS means more than just a new product; the whole process is also widely regarded as an environmental triumph. Soybean whey, a by-product in the isolation of soybean protein, is mostly discharged in China as wastewater, causing serious environmental pollution in waterways and broad public grievances.

China’s State Environmental Protection Administration, the government environment watchdog, has also lauded the SOS production process as a breakthrough in protecting the country’s fragile environment. For that environmental contribution, the company’s SOS is now exempt from all taxes.
In fact, SOS, along with SPI, has already become one of the two major revenue generators for the company.

CEO Li has expressed special confidence in the prospect for SOS and other products. ”With an annual output of 6,000 tonnes, we are now the largest SOS producer in the world. The second largest SOS producer in the world is said to have an annual output of only 800 tonnes. In five years time, our position will definitely be even stronger,” said Li, who is still in his 30s.

Li said the company will further expand its production capacity for defatted soy flakes, SPI and SOS by setting up more production lines and facilities at its plants in Linyi and Daqing to meet the rising demand.

In fact, four Alfa Laval production lines are currently being installed in the four new workshops in the huge Linyi plant, located in the Jinluo High Technology Park, about 25 kilometres from the city centre. They are expected to be put into operation in June, said Zhang Lifeng, pointing to the four rectangular buildings several hundred metres from the roof garden of his R&D building.

The four production lines will increase the company’s annual output of soybean peptide to 20,000 tonnes. They will also bring the total number of Alfa Laval lines in the Linyi plant to 12, making the company a major client for Alfa Laval in China and the world.

Alfa Laval also feels the same. It has greatly enjoyed a solid cooperation with the Linyi company since 2001. Today, the Linyi plant has become an extremely important reference for Alfa Laval’s work both in China and in other countries.

The first deliveries to the Linyi plant were of decanter centrifuges and were soon broadened to include separators, membranes and fluid handling equipment.

There are constantly new cooperation projects in the pipeline and future supplies are likely to include heat exchangers as well. So far Alfa Laval has installed 31 decanters, 27 high-speed separators, a large number of pumps, valves, agitators and other fluid handling equipment as well as five membrane filtration systems in the plant.

The membranes are used mainly for soy oligosaccharide production, which the company plans to expand rapidly in the coming years. This production process is also considered a novel application of Alfa Laval’s membranes which efficiently increase the overall production yield.

Zhang Lifeng, Chief Engineer of Linyi Shansong, is the one who has been dealing with the Alfa Laval processing lines in the plant on a daily basis. He believes that Alfa Laval’s equipment is better than the Japanese equipment installed earlier, because it is more compact and has a larger capacity. ”Alfa Laval also has better after sales service, with engineers arriving on the site less than 24 hours. It has been proved in the last few years,” Zhang said.

Bob Chen, a National Sales Manager of Alfa Laval, described the cooperation between the two companies as ”excellent.” Chen, who has made frequent trips to the Linyi plant in the last few years, will soon start another trip there to finalize a new deal for membranes. 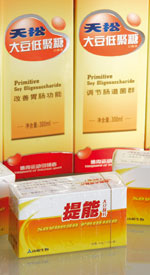 Nothing has been wasted in the soybean processing. We have actually turned waste into treasure.

We have formed a strategic partnership with Alfa Laval. Alfa Laval also has better after sales service, with engineers arriving on the site less than 24 hours. It has been proved in the last few years,”

Alfa Laval provides all you need for a complete membrane system. We also offer a wide range of ancillary equipment and fittings needed for installing and operating the membranes safely and efficiently