Used in Chinese cuisine for more than 2,000 years, soy sauce is today still made according to a time-honoured process. But in the space of just four years, many leading soy sauce producers in China have started to scrap traditional methods and switch to modern equipment from Alfa Laval. The result has been more efficient production, and improved product quality.

The mild scent of soy sauce hangs in the air outside Guangdong Meiweixian Flavouring Foods factory in the southern Chinese city of Zhongshan, reminding the visitor that this is the soy sauce capital of the world.

Meiweixian, with its Chubang brand, is one of the leading producers of this liquid seasoning, which is made from a fermented paste of boiled soybeans, wheat, brine and a mould. Soy sauce was originally invented in China sometime around the 5th century BC, and with its deep brown colour, pleasant aroma and richly satisfying flavour, it is used in place of salt in East and Southeast Asian cuisines, both for cooking and as a condiment. It is also increasingly seen on dining tables in the Western world.

“Meiweixian is number two in the market in China, but the top 10 producers only hold about 20 percent of the market – so there is a great growth potential in this category,” says general manager Yang Mingquan, who is also in charge of production technology at Meiweixian. The company has grand expansion plans to almost double the production in Zhongshan to 500,000 tonnes within three years while building a new factory in Yangxi, also in Guangdong, which will have a capacity of 1 million tonnes.

This Pearl River Delta region in southern China has played a major role in the country’s rapid industrialization over the past two decades, but it is also a centre for the very traditional soy sauce industry. Most of the country’s leading soy sauce producers have clustered in Guangdong because the province’s weather conditions are best for fermentation, which is a critical step in the manufacturing process.

China is the world’s leading soy sauce producing country with an annual production of approximately 5 million tonnes – more than half of the world’s total production of 8 million tonnes. The domestic soy sauce market is highly fragmented, with several hundred – perhaps as many as a thousand – producers. The government is pushing the soy sauce industry towards consolidation, so it is expected that many of the small and medium-sized producers will either go out of business or be acquired.

While many other industries in China have modernized through the introduction of advanced equipment, soy sauce production in China remains very traditional and labour-intensive. For example, after fermentation – which can take up to six months – the sauce needs to be filtered, but the filtration process is still carried out by hand, which can pose food hygiene problems.

Four years ago Alfa Laval realized that its high-speed separators, sterilizers and evaporators – which are used extensively for wine, tea, coffee, juice and dairy production around the world – could modernize this ancient industry. As with these other foodstuffs, there was potential for soy sauce to be made in a more cost-efficient way, and for product quality to be improved.

A team led by Daniel Lin at Alfa Laval in Shanghai contacted leading soy sauce producers to spread the word about the benefits of introducing high-speed separators to soy sauce production. There was initially some resistance, as the soy sauce industry is highly traditional. Also, the technology had not been tested commercially for soy sauce applications, and Alfa Laval – despite being a world leader in the food and beverage industry – was largely unknown in the Chinese soy sauce business. So field tests were carried out with a small separator at a number of potential customers’ sites. Due to differences in raw materials and fermentation processes, soy sauce varies from customer to customer, so Alfa Laval carried out extensive testing to come up with tailor-made solutions for each customer.

Tests showed that Alfa Laval separators offer significant savings in manpower; with traditional soy sauce production between three and five people are needed per machine in the process. With Alfa Laval separators, one worker can supervise up to four machines. The Alfa Laval equipment also takes less space in the factory, reduces the processing time, and is easier to clean than existing equipment.

And then there are considerable product quality benefits from the Alfa Laval technology: contamination risks are reduced as Alfa Laval separators meet stringent food hygiene standards, unlike the existing equipment used by soy sauce manufacturers, which is often not designed specifically for food use.

For dark soy sauce, which is thicker, richer and has caramel added, manufacturers need to reduce the water content, and the traditional way to do this is to use a boiling tank. Alfa Laval’s solution for this is an evaporator called the AlfaVap. This streamlines the process and makes it considerably more energy-efficient: 60 percent of the energy can be saved compared with traditional production.

One early challenge Alfa Laval had to overcome in adapting its technology for soy sauce production was finding the right material for its equipment. Normally, stainless steel is used to manufacture the high-speed

separators for wine, tea and juice, but it would not work for soy sauce since the separators and sterilizers would corrode in just a few months.

“Soy sauce is a very special product,” says Lin. “The low pH value – about 4.5 to 5.5 – combined with high temperatures and a high salt content – 18 to 22 percent – make the working conditions for the machines very tough.” So material specialists at Alfa Laval’s Materials & Chemistry Centre in Sweden tested different varieties of soy sauce supplied by Chinese manufacturers with many different materials, and came up with innovative solutions. So now the AlfaVap evaporators for soy sauce feature titanium plates, while the separators are made with specially developed anti-corrosion materials.

Meiweixian became an Alfa Laval customer in August 2012, when it took delivery of the first high-speed separator at its factory in Zhongshan, and followed this up a year later with an order for AlfaVap. “Our products are regarded as high-quality, and that is why we need to have a high standard of equipment in our factory,” says Yang. “We are still testing, but we believe that the separator can substantially improve our products, especially within the filtration area. Traditional filtration with sediment tanks leaves a lot of sludge.”

The experience of the Chinese soy sauce industry and its switch to Alfa Laval solutions shows that even with processes that have been tweaked and refined for many centuries, there is always room for improvement. 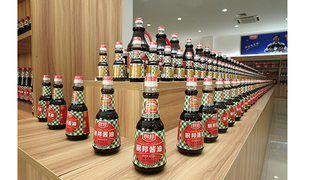 Our products are regarded as high-quality, so we need to have a high standard of equipment in our factory.