Extracting the tastes of Liguria

People who think that old family tradition and quite small-scale production cannot be combined with state-of-the-art technology should visit the Antico Frantoio Sommariva olive oil mill in Liguria, Italy. 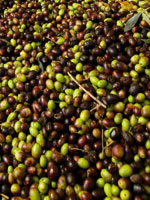 Visiting the Antico Frantoio Sommariva in the town of Albenga close to Genoa in north-western Italy is an experience out of the ordinary. Not only is the olive oil mill located within the medieval walls of the town. As soon as you arrive at the entrance to the premises you are met with ancient machines used for olive oil production which give a foretaste of the impressive museum and the interesting exhibition “Olive trees and their products” inside.

When entering the building you step right into a cosy shop where lots of attractively-packaged delicacies such as extra virgin olive oils, Genoa pesto and olive paste fill the shelves. And there – neat and clean and openly displayed in the shop itself – stands a new complete olive oil processing line in all its glory! Although at an amazing position, the Alfa Oliver 500 olive oil extraction system anyhow seems to be exactly in its right place.

“With our location in a historical environment, it is extremely important that we have a clean production process like this,” says Agostino Sommariva, one of the three family members who run the company. “The new system also enables a fully recyclable process. The olive residue can be used as fertilizer for our organic cultivation, and we heat the house by burning the pits from the olives.”

The Sommariva family, originating from Genoa, moved to Albenga in the 1910s where they started to cultivate wine, olives and basil which they sold in the region. At the end of the 1950s Agostino’s father Domenico Sommariva, something of a legend in Albenga, started the oil mill in the premises where it still is today. “In the beginning he sold the oil in bulk in Imperia – and earned practically 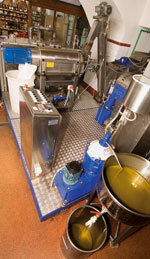 no money,” Agostino recalls. “It was not until he began to bottle the oil himself and sell it on the retail market that the business became profitable.”

The oil was pressed according to traditional methods using a huge milling stone until as late as 1994, when a more modern system, including an Alfa Laval separator, was installed. The new Alfa Oliver 500 line was installed in November 2004, and consequently it is now running on its third olive oil campaign.

The company’s largest product is the extra virgin olive oil Nuovo Mosto, a high quality product obtained from a selection of the very best olives crushed daily and cold-pressed to get an oil with a very low acidity and a rich but delicate flavour. This oil is less peppery than the Tuscan oil and thus ideal for delicate dishes in which the oil flavour must not dominate, such as fresh fish and spring vegetables.

Organic cultivation an important base

The Sommariva company comprises much more than olive oil extraction. It makes a lot of other products and has its own flourishing farm with an area totalling 115,000 square metres. The farming activities include vineyards, olive groves and cultivation of vegetables such as artichokes and tomatoes and aromatic herbs such as basil, wall rocket, parsley and oregano. Agostino Sommariva also proudly shows to the Swedish visitor the fields of dill, the herb which is practically unknown outside of Scandinavia and which Sommariva cultivates only for export to this region.

On the day of the visit in mid-December, Liguria certainly appeared at its very best. The sky was blue, and although the temperature was still mild, there was a sense of crispness in the air. On the beautiful olive tree terraces overlooking the sea, the cautious picking of the greenish black olives, mainly of the Taggiasca type, was still going on by pickers using hand rakes to strip the olives from the branches and gathering the fruits in nets fastened below. “This year has not been ideal as far as the olive harvest is concerned,” says Agostino Sommariva. “The weather has been too hot and dry.”

Sommariva practices organic cultivation which is of great importance to the company’s quality image. It ensures that only natural manure is used and that gentle farming methods are applied. The company has followed these methods for more than 30 years and has always worked closely with the Suole e Salute association (Soil and Health) of Turin, the first institution in Italy for the study and control of organic farming. “Organic cultivation is becoming increasingly important for the consumers. Many of our customers ask for it, both in Italy and abroad,” says Agostino Sommariva.

Quality all the way

The company’s extensive laboratory, located a few kilometres from the oil mill, is not just a laboratory in the ordinary sense. This is also the production site for a large variety of tasty products, based on the extra virgin olive oil and the fresh products from the farm. This is also where the bottling of the oil and the packaging of all national and international deliveries take place.

Tasting the company’s sauces and other products is a true feast for the palate. The olive paste has a distinct, yet pleasant salinity. The sun-dried tomatoes with aromatic herbs in extra virgin olive oil bear all the tastes of Italy. And the selected small artichokes prepared according to ‘grandma’s recipe’, simply melt in the mouth. Most appreciated of all products is the genuine Pesto Genovese, made of certified organic ingredients of the highest quality; Genoese basil D.O.P., extra virgin olive oil, first grade pine nuts, genuine Reggiano parmesan cheese, Pecorino cheese, salt and garlic. The pesto is a true best-seller for the company.

The laboratory is the domain of Gianni Sommariva, Agostino’s older brother. In addition to developing and controlling the production and packaging of the sauces and preserves, Gianni focuses significantly on conforming to the more and more stringent EC rules which also require investments in new machinery. “I’m very proud of our qualified staff, our advanced technology and our commitment to quality in everything from our own raw material to the carefully selected recipes with the home-made and natural taste,” he says.

30–35 per cent of Sommariva’s production is exported to places such as Germany and Scandinavia. The largest single customer is as far away as in Australia. This contact was made in connection with Gianni’s and Agostino’s sailing activities. They have been World’s Sailing Champions and Olympic competitors many times; a large amount of cups on the shelves provides visual evidence of their achievements.

Export, international relations and marketing are the responsibility of the third company and family member, the sister Mina. Her skills and knowledge of foreign languages is of great value to the company’s present and future expansion on the international market.

When asked about visions and plans for the future, Agostino Sommariva said that the company will make certain investments in new production equipment in the laboratory but that he sees no need for new installations in the oil mill in the near future. “We already have the most modern line on the market. It’s up to Alfa Laval to inform us when they have new innovations to offer,” he concludes with a smile.

A line for individual needs

This system is a continuous processing line with a capacity of up to 500 kg of olives per hour. It features virtually all the Alfa Laval olive oil processing technology available on large-scale industrial plants but downsized and customized to meet the needs of the individual grower.

After cleaning to remove dirt and debris, the olives are crushed into olive paste. The system at Sommariva can crush the olives both with the pit and without. Milling is followed by malaxation for about 45 minutes in which the olive paste is gradually heated and the enzymes activated. The temperature is automatically controlled and kept below 27°C.

The oil is extracted using a UVNX 904 two-phase decanter which separates the oil from the pomace. The final step is clarification in a MMB 304 solid-bowl separator, in which any remaining water and olive residue are removed from the oil. At the Sommariva plant no water is added during the whole extraction, giving a much less emulsified oil with more fragrance and taste.

“The Alfa Oliver system installed in the Sommariva plant has been adapted to obtain the special, somewhat cloudy consistency of the Nuovo Mosto brand,” says Lamberto Baccioni, Alfa Laval’s Olive Oil Manager. “Among others, we have reduced the speed of the separator bowl by 45% to avoid emulsion.”

Agostino Sommariva, who manages the oil mill production, is very pleased with the new system which he finds both efficient and environmentally friendly and by which he has managed to decrease the acidity in the oil to even lower levels than before.

“This was our first installation of the Alfa Oliver system, and it has been extremely rewarding to be able to install a complete line at Antico Frantoio Sommariva,” says Roberto Gatti, Area Sales Manager at Alfa Laval. “With the family’s good reputation and long tradition in olive oil, this is certainly a valuable reference plant for us.”