Every year nearly 10 million people visit the Louvre in Paris to marvel at iconic works of art such as the Mona Lisa and Venus de Milo. What they don’t see is the elaborate cooling system that ensures these priceless masterpieces can be enjoyed in comfort.

With one of the world’s greatest art collections, the Louvre’s air conditioning is far from its main attraction. But this iconic building in the heart of the French capital is cooled by one of the world’s largest district cooling systems. In fact the 52km underground network, which snakes beneath the city’s historic centre, serves over 500 buildings. In addition to the Louvre, this also includes other famous landmarks such as Paris Opera, the Forum de Halles, the Banque de France, the Galleries Lafayette and the Ritz Hotel.

The basic concept behind the district cooling system is that one central source supplies multiple buildings. This offers a number of advantages over individual air conditioning systems, particularly for a city like Paris, where many of the buildings have significant historical and architectural value that prohibits the installation of air-conditioning units. Having one central source also frees up space, which is a significant advantage given real estate value in Paris.

Each building is served by a fully automated intelligent delivery substation, which is connected to a network of six district cooling plants. All six plants are located underground, and three of them use water taken directly from the River Seine. The other three use a cooling tower for refrigeration and are used only during the summer when demand peaks. It is estimated that using river water saves some 500,000 cubic metres of drinking water every year.

Initially Climespace, the company behind the system, used different heat exchangers in each substation, but it was soon realised that it would be more efficient to use one supplier. And so the company signed a three-year contract with Alfa Laval to supply plate heat exchangers for 100 substations. Shortly afterwards, the partnership expanded when Climespace decided to find a supplier that could develop a standardised concept and offer complete substation units rather than just heat exchangers. Together with French system builders BBS, Alfa Laval has been able to offer a total concept from the supply of new equipment, to installation and maintenance.

The latest installation has seen the district cooling system extended to the Carrousel du Louvre, a shopping mall located right in front of the Louvre, serving as one of the museum’s main entrances.

“Over the years, Alfa Laval has become a true partner and has contributed, thanks to its expertise and technology, to the performance of the Climespace energy network, which is the first district cooling system in Europe and one of the biggest in the world,” says Jean Levezac, Head of Cluster Connections/Substations at Climespace Engineering. 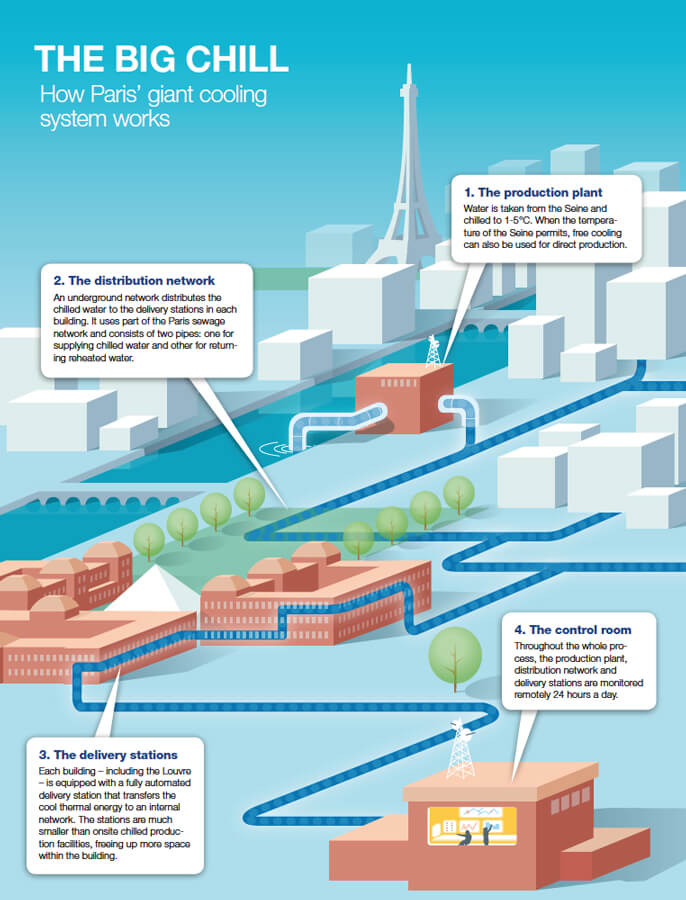 Paris’ district cooling system is one of the largest of its kind in the world and services over 500 buildings including:

Paris’ district cooling system is one of the largest of its kind in the world and services over 500 buildings including: