One of the great features of the Spiral heat exchanger is its ability to handle media containing suspended solids without clogging. Mitteldeutsche Erdoel-Raffinerie GmbH (MIDER) in Leuna, Germany took advantage of this feature when they replaced their existing bottoms product coolers in the fluid catalytic cracking (FCC) unit with spiral heat exchangers, and in this way drastically reduced the down-time and maintenance cost.

MIDER’s Leuna-refinery is a totally new grass-roots facility replacing an older refinery that was located on the same site. The new refinery which is owned by Totalfina Elf, started up in 1997. Originally the installation included two double-pipe exchangers in carbon steel - one in operation and one as stand-by - to cool the bottoms product from the main fractionation column.

Only two weeks after start up of the FCC-unit the double-pipe exchanger plugged up on the product side and had to taken out of operation for cleaning. The fouling consisted of suspended catalyst particles as well as cracked by-products from the FCC process.
The cleaning of the exchanger, which was done by means of a high pressure water jet of 1 000 bar, took three to four days to carry out. During subsequent operation this cleaning procedure had to be repeated about every 10 days at a considerable cost.

The Spiral heat exchanger is constructed with one channel per medium only, which eliminates the possibility of the media channelling. This design makes it particularly suitable for heating and cooling of slurries and other process streams containing solids and fibres.
Another important factor in the suppression of fouling deposits is the turbulence, which is considerably higher in the spiral channel than in the double-pipe exchanger. Increased turbulence keeps the solids in suspension, which counter-acts clogging of the channel.

The installation of the spiral heat exchangers has turned out to be a very good investment. The saved service cost during their first year of operation alone, amounts to the whole capital cost for the two spiral exchangers. 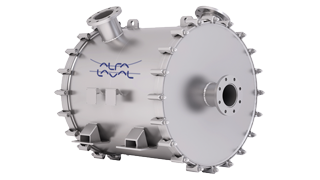 Alfa Laval spiral heat exchangers are designed to handle the toughest heat transfer challenges, such as frequent fouling from dirty media or limitations from pressure drop and floor space.