In its efforts to continually implement sustainable practices in its operations, Petronas has invested in cutting-edge energy-efficient technology.

The first of two such projects was completed in November 2010 and will reduce the energy consumption in the Petronas Crude Distillation Unit (CDU) by almost 10 percent while reducing CO2 emissions by 8,000 tonnes per year.

The second project is scheduled to turn the refinery into a 24/7 operation and is due to be completed by February 2013. When completed, this is expected to increase capacity by as much as 600,000 barrels of crude oil a year from 17.65 million to 18.25 million, while improving energy efficiency and reducing the CO2 emissions of the CDU even further.

Both projects involve the use of Alfa Laval's compact welded plate heat exchangers, known as Compablocs. This equipment is designed to recover the maximum amount of heat produced in the refinery processes.

Project One, which involved the installation of a Compabloc in the CDU via a design configuration, allowed the refinery to keep the original S&T on stand-by and achieved a payback period of less than a year.

While the cost savings is important, the Compabloc also contributed to the refinery's energy efficiency rating. This is measured according to the Solomon Energy Intensity Index (EII), an industry standard. The lower the score, the more energy-efficient you are. The Kerteh facility, which was already in the top quarter of the world's most energy-efficient refineries, cut its score by three points with the Compabloc technology.

No disruption in output

One of the key advantages of Compabloc is that with its small space requirements, it can be installed alongside an existing the S&T system, which is bigger and bulkier. This means both systems can exists in a parallel configuration, keeping the old S&T in stand-by. When a Compablocs need to be cleaned, which is typically much less frequent than S&T, the refinery can switch to the old system to ensure that output is not disrupted.

Petronas has three refineries in Malaysia (two in Malacca along with Kerteh). Says Ahmad Hamizan: "The Compabloc technology has contributed to our efforts to be as energy-efficient as possible." 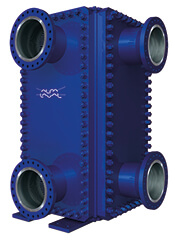 The compact, fully welded Compabloc heat exchanger is designed to operate with a wide range of aggressive media and at high temperatures and pressures.

The energy savings are good and the commissioning was achieved within the targeted timelines.