The Portuguese beverage group Unicer enjoys a unique market position; it has conquered more than 57% of the domestic beer market. Its recipe for success is seemingly simple; to supply beer to suit the consumers’ taste – and at a good price too.

In total, Unicer sold over seven million hectolitres of beverages in 2004 and the group’s total revenue amounted to EUR 455.8 million. “It was a 6.4% improvement compared to 2003”, says Manuel Ferreira De Oliveira, Unicer’s Chairman. “We pursued our strategy of consolidating Unicer as the most competitive Portuguese business group in the beverage sector and took another step towards fulfilment of our vision to be one of the strongest players on the Iberian Peninsula through continuous development of our work force, our operations and our market opportunities.”

All Unicer’s beverage sectors show interesting U developments. The company is the Portuguese market leader in unflavoured bottled waters, and its market share is increasing. Several new products were launched last year in the soft drinks and fruit juices sector. Unicer boosted its wine business by extending its wine range to cover the various wine regions of the country. And by a successful launch of the new coffee brand Bogani and a re-launch of A Caféeira, one of the oldest coffee brands on the market, the company managed to attract a younger crowd.

But beer is Unicer’s main business, its history, its base - and its greatest source of pride. It will most probably continue to be so in the foreseeable future. The brewery business accounts for almost 60% of group sales and, last year, the company produced 405 million litres of beer in three plants; in Leça do Balio close to Porto, in Santarém north of Lisbon and in Loulé on the Algarve coast. 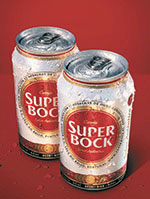 Unicer’s flagship and largest brand is the Super Bock which alone has almost 45% of the domestic beer market. This brand exists in several varieties. The original Super Bock is a high quality beer of the pilsner type. The Super Bock Stout, launched in 2003, is a black beer made of special malts with a creamy, long-lasting head, a fine flavour and an intense colour. The Super Bock Stout immediately became a great success, and over 22 million litres were sold in the first year. In 2004 yet another Super Bock novelty was launched; the Super Bock Green.

The launch marked Unicer’s entrance into the lime beer segment. More than 8 million litres of the new beer were sold in its launch year. Recently, an alcohol-free version of Super Bock was launched as well; the Super Bock Twin. As the name indicates, the taste and flavour of this brand imitate the original Super Bock.

Other Unicer beer brands are Cristal, the oldest beer in Portugal, and the Cheers family of alcohol-free beers. The newest member of this family is Red Cheers – a slightly bitter, full-bodied beer with the rich, fruity aroma of roasted malt.

Unicer also works in cooperation with large, international brewery Groups like Carlsberg and Guinness. Through licence brewing and distribution of the Carlsberg brand, Unicer is dominant on the premium beer market in Portugal.

Boosting exports is one of Unicer’s ways to compensate for the economic recession in its home country. The company’s exports have increased considerably in recent years, and 2004 was no exception. Total group exports rose 12.2 % against 2003 and in the beer sector export sales were up 21.6%.

During last year, the strongest sales volume growth was in Spain. Unicer puts great emphasis on developing this important market and Spanish operations now include a network of 30 distributors supplying 3 400 sales outlets.

But sales to Portugal’s former colony Angola still strongly dominate Unicer’s cross-border sales; 60–70 % of its exported beer goes to this country. “It is a dynamic market with several new competitors and one of our main challenges is to strengthen and expand our position in Angola. We have tangible plans to build our own brewery in this country, ” says de Sousa.

For the benefit of society – and the brand

Unicer undertakes a number of sponsorships, donations and activities with the aim to contributing to the development of society, strengthening its brand – and increasing sales. A lot of cultural, artistic and sporting events are sponsored by Unicer.

A major event for Portugal – and Unicer – last year was the European football championship UEFA EURO 2004. Carlsberg, who owns 40% of Unicer’s shares, was official sponsor of the event. The country was having a party, and both Carlsberg and Super Bock enjoyed great brand recognition and sales growth. The size of the event required the involvement by virtually all Unicer group staff and the company demonstrated its considerable capacity for team work and commitment to a common aim.

Unicer also has strong relationships with universities and institutions. “It is of great importance for us to be able to share knowledge with the academic world in order to develop

competencies and synergies. Among others, we have ongoing R&D projects concerning beer’s effect on health together with the Institute of Beverage and Health,” says de Sousa.

Like all industries of its kind, Unicer has to respect increasingly strict environmental and safety rules and regulations. This, together with the company’s own ambitious targets when it comes to quality, environment, health and cost-efficient operations, leads to continuous investments in modernization and improvements of plants and equipment. From 2002 to 2004 Unicer fulfilled its investment plan aimed at environmental protection in all its different aspects; wastewater treatment, control of gas flows, wastes, noise control and landscape integration.

The beverage and brewing industry requires a large amount of energy, and efficient use of energy is a highly-focused area for Unicer. Strict monitoring of energy consumption is carried out in all premises and measures are taken continually to decrease consumption in relation to annual goals.

Another prioritised area is water management where strict monitoring of water usage has resulted in large improvements. “Six years ago our water consumption was seven litres for each litre of beer produced. Today it is only four litres and we aim to reduce it even further,” says de Sousa.

The plant in Leça do Balio close to Porto is Unicer’s largest brewery plant accounting for some 60% of the group’s beer production. It is also its oldest brewery, inaugurated in 1964. “We have carried through several modernization projects in this plant in recent years, and the upgrading continues,” says Pedro Moreira da Silva, Brewery Director at the Leca do Balio plant. “For example, we are the only brewery in the country with a totally-automated bright beer cellar.”

Alfa Laval is the supplier of the complete routing system for the new bright beer cellar, among other things. “We want process suppliers that play an important role in supporting our endeavours to enhance product quality, decrease production costs and improve overall operation efficiency. Alfa Laval is such a supplier,” says Moreira da Silva.

Another big investment in the pipeline for the Leça do Balio plant is a new, automated fermentation cellar with planned rebuilding starting next year.

Although Unicer has an established position on the beer market, it has to fight for its market shares constantly. “Our largest competitor is strong too, and although we already have high quality products and competitive prices, we must improve all the time to keep the lead,” states João Jacques de Sousa. “And since the beer market is quite stagnant we need to boost sales by introducing new products that attract consumers.”

De Sousa sees the ongoing debate about the effect of alcohol on health as one of the biggest challenges for the brewery industry today. “We already have alcohol-free beers in our range today, and now we are planning to invest in a new process that will improve the quality of these beers even further. Even if consumption of alcohol-free beer still is rather small in most countries, it is catching up. Things have changed since a few years ago, when I tried to order alcohol-free beer during the Oktoberfest in Germany. They stared at me as if they had seen an alien,” he concludes with a laugh.

Alfa Laval is one of the main suppliers of process equipment to Unicer’s biggest brewery in Leça do Balio.

The supplies include the automatic routing system in the new bright beer cellar which offers an impressive sight. The system comprises some 280 sanitary valves, the majority of which are Unique mix-proof valves. All valves are equipped with ThinkTop intelligent valve control units.

“The new system improves product quality, since it minimizes the pick-up of oxygen which causes oxidation of the beer and decrease shelf life. It has also resulted in improved yield and reduction of work force,” says João Jacques de Sousa, General Manager of Unicer Cervejas, S.A.

Like most major brewery companies, Unicer applies high gravity brewing, i.e. brewing strong beer and then blending it with de-aerated water to achieve the desired final beer quality. This method is a way to increase brewery output without the need of large capital investments.

Alfa Laval’s Aldox system for de-aeration of water plays a vital role in high gravity brewing, and an Aldox is also installed in the Leça do Balio plant. The system makes it possible to achieve dissolved oxygen levels as low as 0.02 ppm. “We installed the Aldox since we had problems with our old de-aeration system. The new unit functions extremely well,” says Pedro Moreira da Silva, Brewery Director at the Leça do Balio plant.

The way that yeast is propagated is also a crucial factor for the quality of the beer. A Scandi Brew yeast propagation system from Alfa Laval is installed in the brewery to ensure high yeast vitality and bacterial integrity.“

The cooperation with Unicer is challenging and exciting,” says Luís Peixoto, Sales Manager, Sanitary & Liquid Food at Alfa Laval in Portugal. “They are clear about what they want to achieve, but they have a very open mind when it comes to discussing new ideas and unconventional solutions."

Beer is considered one of the most complex fermented beverages due to its taste, colour, variety and mouthfeel. Besides, beer has a wide variety of ingredients which is why it makes it so complex.