Alfa Laval - No more wine up in smoke

No more wine up in smoke

Each year smoke taint ruins vast quantities of wine worldwide, causing huge financial losses. Until now, there has been no satisfactory solution, but a new method by Alfa Laval may prove to be a breakthrough. 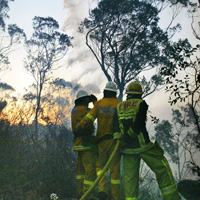 Taste in wine, as in other things, is highly subjective. However, it is a safe bet that bouquets of burnt bacon, sweaty socks and ashtrays have little mass appeal. These are some of the flavours associated with smoke taint in wine.

Each year around the world, smoke taint from wildfires adjacent to vineyards renders huge quantities of grapes and wine useless, causing severe financial damage. For example, it is estimated that bush fires in the King and Alpine valleys in Australia in 2007 caused the local wine industry to lose as much as 90 million Australian dollars.

Similar smoke taint in wine may be caused by contamination by wild yeasts of the Brettanomyces bruxellensis type. And this problem has spread markedly during the past few years, according to Rolf Zimmermann, leader of the wine analytics team, and Katharina Schneider, technical assistant with the Agroscope Changins-Wädenswil Research Station (ACW), which is one of five Swiss Federal agricultural research stations. It has carried out Brettanomyces research for more than 10 years.

Unfortunately, the warming climate is set to aggravate the smoke taint problem, both as it contributes to the risk of wildfire and as it encourages the propagation of yeast. “This type of yeast is mostly found in warmer viticulture regions, so climate change could further propagate the problem,” says Schneider.

This makes the future look rather bleak for wineries left with large quantities of smoke-tainted grapes or wine, especially as there is currently no satisfactory solution on the market.

Says Zimmermann: “Today there are no real solutions for the treatment and rectification of smoke-tainted wine. The use of clarifying media such as activated charcoal, bentonite or similar products has not brought the desired success. The best choice has been to filter the wine and subsequently mix it wit h a taint-free wine to bring the smell and taste below threshold values.”

Reverse osmosis filtration has been used, but not only is this costly and energy-consuming, but the process may also remove desired flavour and texture along with the smoke taint. The winery might end up with lower-quality wine that could be sold but would likely damage the wine’s brand reputation.

Another solution has been to filter the wine and then distil it, but apart from being energy-consuming, this subsequently causes problems with tax regulations.

Now, at last, the wine industry’s search may be over. In cooperation with ACW, Alfa Laval has developed a solution that promises to be a breakthrough in treating smoke-tainted wine, whatever the cause. “This approach uses a nanofiltration membrane and a natural absorbent to remove only the flavour components causing the smoke taint,” explains Bruno Klaus, Portfolio Manager Membranes Alfa Laval. “The benefits include significantly reduced power consumption compared with reverse osmosis and distilling plants. Not having to distil inferior wine, the winery can also avoid any implications with customs and excise. And importantly, it is a lot easier on the wine.”

What originally set the ball rolling was an enquiry received by Alfa Laval’s Australian sales company about a membrane suitable for removing smoke taint. “We started screening our membrane portfolio,” Klaus says, “but to develop the right one for this application we had to bring in outside help for the testing.”

Based on ACW’s know-how in this particular area, Klaus set up a partnership with the institute. ACW has since conducted
thorough tests to find the right membrane type, and now it looks as if it is getting there.

“We’ve found a membrane that is practical for filtering out the smoke taint,” Schneider says. “The results look promising. The filtered wine contains practically no undesirable substances and can be restored into the residual wine. There are still some points where further clarification is necessary, but so far, we’re excited about the results.”

The initial tests of Alfa Laval’s membrane technology should certainly instil hope in the wine industry. While flawed wine can never be turned into top-quality wine, Zimmermann says, “just being able to turn it into sellable wine would be extremely valuable for the wine industry.”

With the newly developed nanofiltration membrane at the core, Alfa Laval is preparing to go to market with its solution for smoke-tainted wine. “There are still some endurance tests,” Klaus says, “but once they’re finished, we can provide all the necessary components. I have already started discussions with interested system builders targeting the wine industry.”