Major tests of methanol as a marine fuel will soon begin at the Alfa Laval Test & Training Centre in Aalborg, Denmark. Working closely with MAN Energy Solutions and other partners, Alfa Laval will explore the possibility of running the centre’s four-stroke, 2 MW diesel engine on methanol – without modifications or another pilot fuel. The testing is the third stage in an ongoing research project funded by Danish EUDP (Energy Technology Development and Demonstration Program).

Initiated two years ago, the EUDP-funded methanol project partners Alfa Laval and MAN Energy Solutions with the Danish Technological Institute (DTI), Technical University of Denmark (DTU) and biofuel producer Nordic Green. Through joint research, the consortium seeks to develop a methanol fuel system that can adapt to today’s marine diesel engines. Methanol, which is abundant and clean-burning, is one of the most promising fossil-free fuels available for future shipping.

“The move to clean-burning methanol will be a crucial step in decarbonizing the shipping industry,” agrees Klaus Petersen, Engine Specialist, Performance & Optimization at MAN Energy Solutions. “Through our collaboration with Alfa Laval and the other project partners, we hope to make that step significantly easier for vessels to take.”

Burning methanol in an unmodified diesel engine will require new engine software, which must be developed through engine testing and work with combustion modelling.

Early tests of the concept on smaller engines at the Technical University of Denmark (DTU) and later at the Danish Technological Institute (DTI) showed promising results. This led to a small-scale experiment with methanol at the Alfa Laval Test & Training Centre, using a single cylinder of the centre’s 2 MW marine engine.

“We were excited at just how well the one-cylinder experiment ran,” says Jørgensen. “And now we are ready to proceed with wider testing.”

Alfa Laval is well prepared to move ahead, having already equipped the Alfa Laval Test & Training Centre with tanks and ancillary equipment for working with biofuels. The tanks have been readied for an exceptional delivery from Nordic Green, who supplied the green methanol in March.

“We produce our methanol from waste sources instead of new biomass,” says Bo Gleerup, CEO at Nordic Green. “This means the coming combustion tests will be neutral in CO2 impact – exactly as the operation of tomorrow’s vessels needs to be.”

Once the fuel arrives, the first task will be determining how to handle it at scale. Because methanol is a liquid at room temperature, it can be stored in unpressurized tanks. However, a low flashpoint of 7°C makes methanol highly volatile – despite the challenge of igniting it through compression. After working out the handling practicalities, broader tests of methanol in the unmodified engine will commence in April.

Fuel focus that extends beyond the engine

For Alfa Laval, methanol testing is part of looking ahead at the marine fuel landscape, which will shift from today’s emphasis on LNG to methanol and then renewable ammonia. Although the current project has the engine in focus, it provides a practical catalyst for much wider development work at the Alfa Laval Test & Training Centre. Alfa Laval’s scope, while excluding the engine itself, includes many applications that will be influenced by future fuels.

“When it comes to new fuels, our close work with engine makers leads us to new ideas and opportunities,” says Jørgensen. “A good example is Alfa Laval PureCool, our solution for reducing methane slip from LNG engines, which was developed in partnership with WinGD. Our boilers and other existing products will also be used with methanol, so we need to do the same fuel homework we did with LNG.”

“We were investigating LNG combustion at the Alfa Laval Test & Training Centre long before the LNG market began moving in earnest,” Jørgensen emphasizes. “Understanding the fuel and how it works in depth is of huge importance before bringing anything to market. The same will be true for methanol and ammonia.”

This is Alfa Laval

Alfa Laval is active in the areas of Energy, Marine, and Food & Water, offering its expertise, products, and service to a wide range of industries in some 100 countries. The company is committed to optimizing processes, creating responsible growth, and driving progress – always going the extra mile to support customers in achieving their business goals and sustainability targets.

Alfa Laval’s innovative technologies are dedicated to purifying, refining, and reusing materials, promoting more responsible use of natural resources. They contribute to improved energy efficiency and heat recovery, better water treatment, and reduced emissions. Thereby, Alfa Laval is not only accelerating success for its customers, but also for people and the planet. Making the world better, every day. It’s all about Advancing better™. 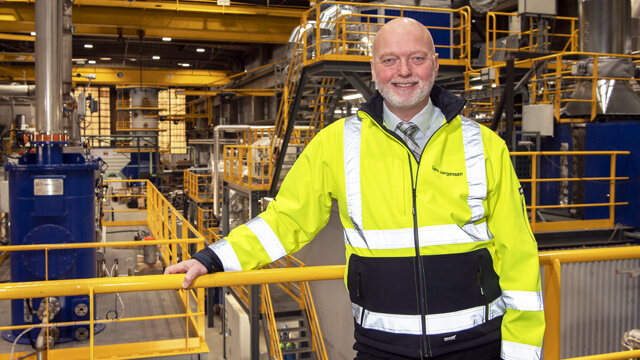